So I wish I could say I was the brilliant mastermind behind this recipe.. but sadly I’m not. I stumbled upon the original recipe from Fitness Magazine on Pinterest and fell in love with the idea of cooking oatmeal in tea. Two things I absolutely adore mixed together into gooey goodness- oh my! 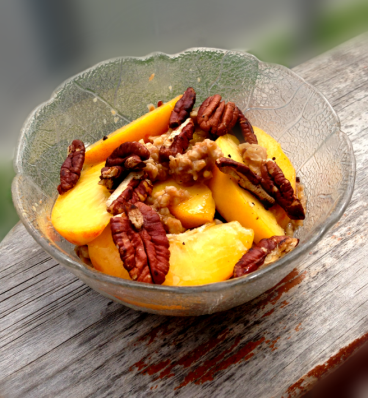 I did make some super minuscule adjustments, but this recipe was pretty much perfect on its own. I used steel cut porridge oats instead of quick oats to add some extra fibre and protein, and I added a tablespoon of vanilla yogurt instead of cooking the tea in milk to add creaminess and compliment the vanilla flavours of the french vanilla chai tea I used instead of just normal chai tea. I also roasted my pecans to bring out their flavour, used fresh peaches (cause I had some super fresh ones from a local farm), and added a pinch of cinnamon, because I just love cinnamon. I highly recommend giving it a try! I certainly know I am going to be spending the next few weeks experimenting with different teas and fruit combinations :-)

1. Boil water over stove and steep tea for 3-5 minutes.

2. Add oats and cook on medium/low heat for 10-12 minutes, or until tea is absorbed.

3. While the oats are cooking, roast pecans in a small pot over the stove, stirring constantly to avoid burning.

4. Pour cooked oats into a bowl, and stir in vanilla yogurt.

5. Eat a slice or two of peaches, and put the rest on top. (I found a whole peach too much for the one bowl of oatmeal ;)

6. Sprinkle with roasted pecans and cinnamon, and drizzle with maple syrup to serve and enjoy!

Welcome to My Blog!

Hi! I'm Sarah, though some call me crazy. This is my blog about healthy living featuring vegan and vegetarian recipes, and the odd workout or two. Hope you comment and enjoy!!